It’s another Football Saturday! Look at all the ladies dressed to the nines, with their recently purchased j. crew blouses, skinny jeans, buggy sunglasses and riding boots. The men in their starch white button-downs, jeans and extra cashmere sweaters, for when the sun goes down. A beer in hand, a barbeque, some whiskey and/or wine, and we are off to have a good time. 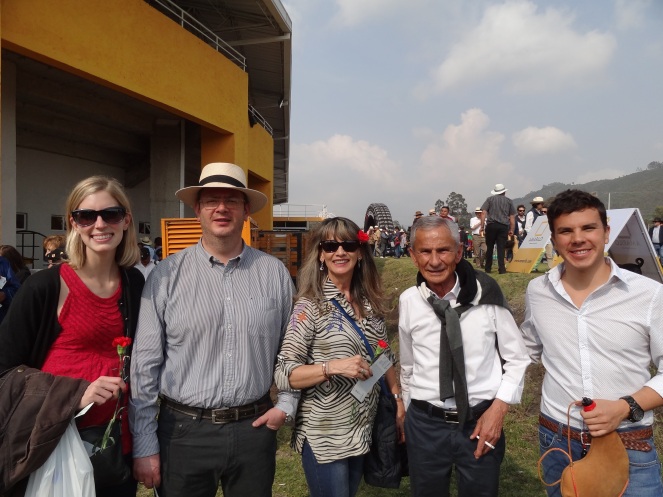 Well, it just so happens, that Americans aren’t the only ones to day-drink and party in style. Yes, I know, you have also seen the polo matches and the horse races in the UK, of which the likes of Prince William and Princess Kate can be found. But I bet you didn’t know that Colombians too have an event, where they too can drink you under the table, so to speak.

It’s not your traditional sport or theatrical event. It’s kind of a mix of both. A bit of music. A bit of risk. A dance. A routine. An art. A culture.

Haven’t guessed yet? Well, I’ll give it to you. Bullfighting. 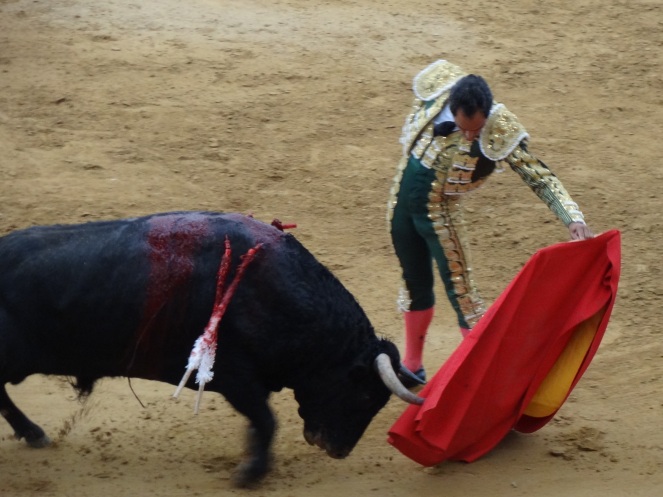 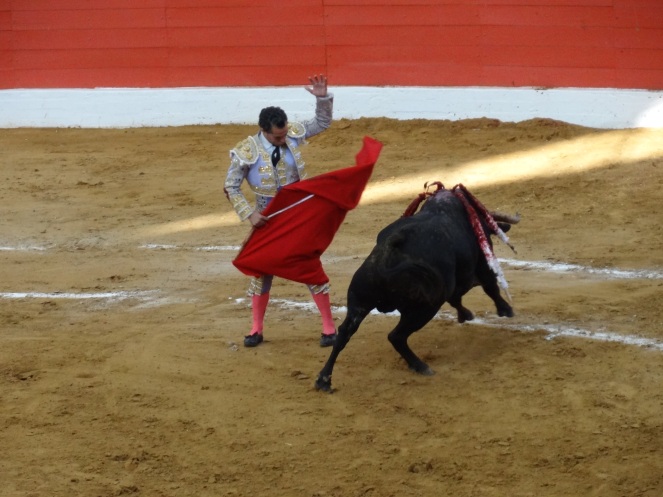 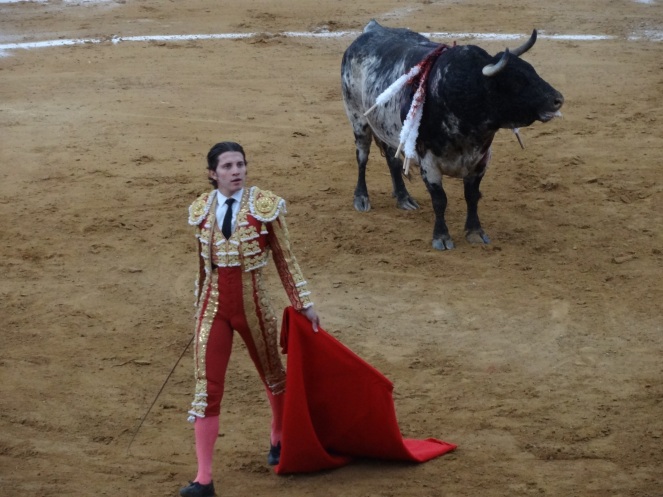 Bullfighting came to Colombia as part of the Spanish inquisition. Bullfighting has been around for centuries, and was popular in ancient Rome. While it still exists today, there is much controversy over its “appropriateness” or in it’s treatment of animals, as 6 bull are killed throughout the event. Even today, it is illegal in the city of Bogota, which is why we had to leave the city for the event.

To be honest, I was like most Americans, not understanding what bullfighting was. If someone were to have asked me, I probably would have said that it was just some guy running around with a red flag trying to kill a bull. So when Santiago asked me if I wanted to come with him and his friends to bullfighting, I hesitated in saying yes, as I wasn’t sure about the killing of the bull part, but interested in understanding what this thing was all about.

I thought that maybe I had a preconceived notion, and maybe if the bull did in fact die on the spot, then it wasn’t much different than me eating a hamburger. In saying, that if the animal died quickly and pain free, then it doesn’t matter what it is used for. I decided to go with an open mind.

The preparation for the event began at 10am, getting “beautified”. I first put on a nice white and blue swirly patterned top, a dark pair of jeans and my tall, black riding boots, that was until Santiago warned me that I should put on something I wouldn’t be upset if I spilled wine on myself. Thus, I changed into a bright red top, black sweater, dark jeans and kept the boots. Ready. 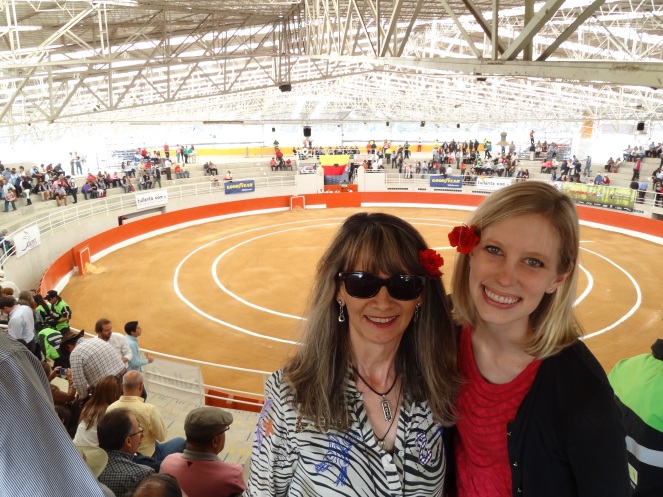 By 11:30am, we were in a cab headed to his mother’s apartment to get picked up by a van. We made a quick stop at the grocery store to buy two 1-liter boxes of wine and a fifth of brandy. Before joining the van of 8 other people heading to the event, we filled up a boot, which is used to drink out of at bullfighting events (as seen in the first picture above).

The general rule is one boot for 2 people, and as each boot fits 2 liters of alcohol, that means about 1 liter of wine with some brandy per person….which is a lot of alcohol for an afternoon! While people fill the boot up with whatever they would like (Aguardiente – liquorish tasting liquor of Colombia, whiskey, tequila), we stuck to the traditional wine with brandy.

Upon hoping in the van at about 1pm, we hardly made it 2 minutes before joining Bogota traffic. Living in a city of 9M people, with only a 3 lane “highway” is a recipe for traffic, no matter the time of day. The nice part about being taken to the event in a van was that even being in traffic was not a problem, we just began our drinking.

By the time we got to the event, it was already 3pm and the show was planned to start at 3:30pm. We joined the swarms of people, zigging and zagging in search for a quick bite to eat before we took our seats. Making our way through the crowds, we followed the signs pointing to a sort of food court with choripans (chorizos in buns – kind of like a hot dog), lechona and pork with sides (potatoes, yucas, plantains and guacamole). Santiago, his mom and I all opted for the lechona. 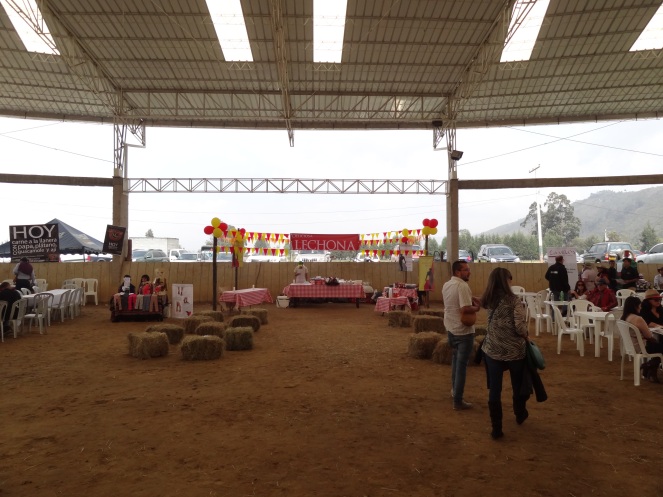 Lechona is a roasted pig stuffed with yellow peas, green onion, yellow rice and spices. As it is served, you typically get a plate full of the mix inside the pig, a piece of the skin and an arepa (little pancake like thing, which this one tasted more like styrofoam than anything else to me). Might sound like a strange combo, but it’s delicious! 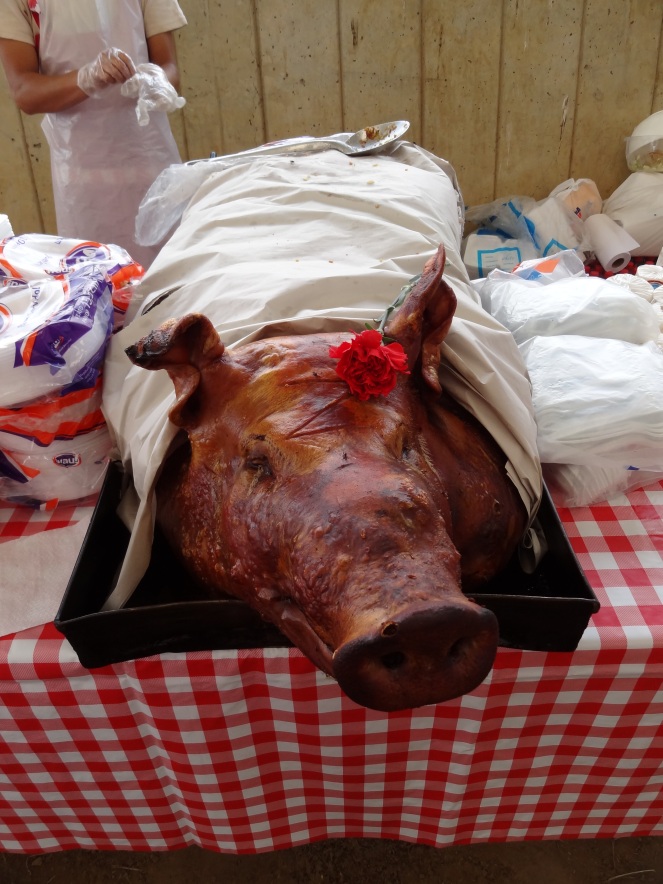 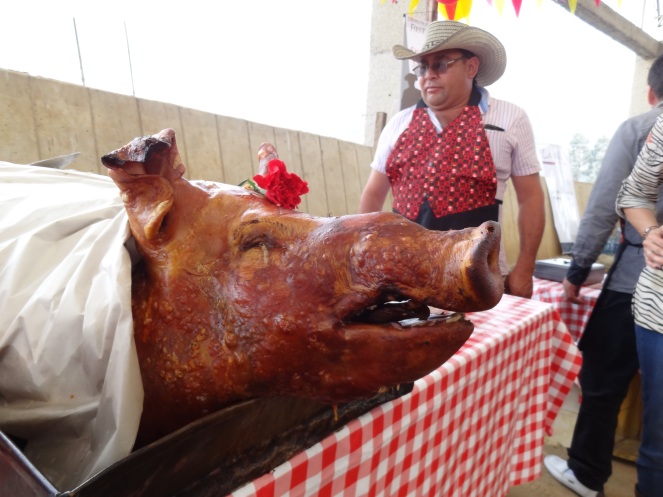 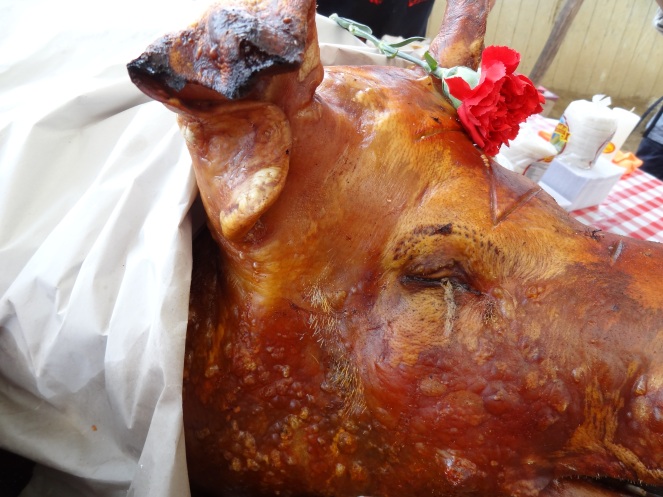 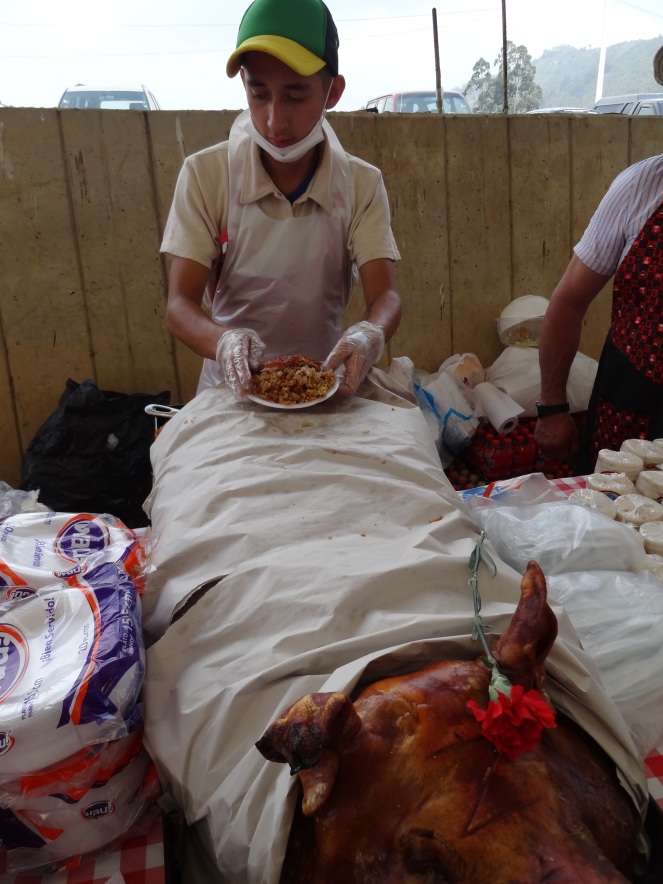 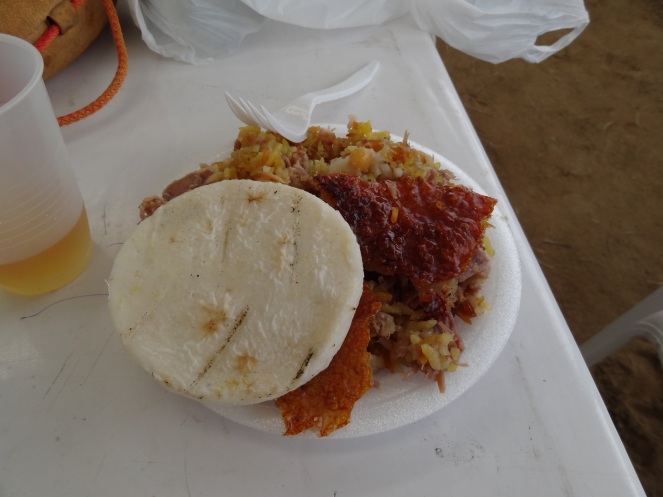 After stuffing our faces with lechona and happy to have something in our bellys to absorb all the alcohol, the music chimed signaling that it was time for us to find our way to our seats. The arena, if you want to call it that, was circular in nature, with concrete bleachers surrounding a circle down below for the bull ring. The band sat just above the main entry way, above the yellow and red flag, where the horses, mattadores and clean-up crew came in and out. 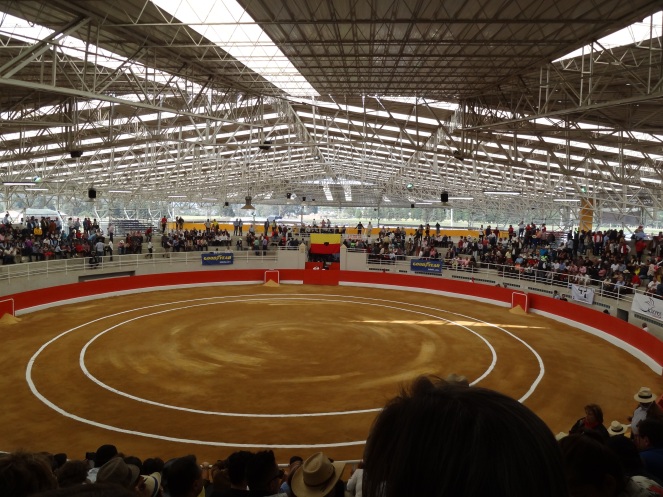 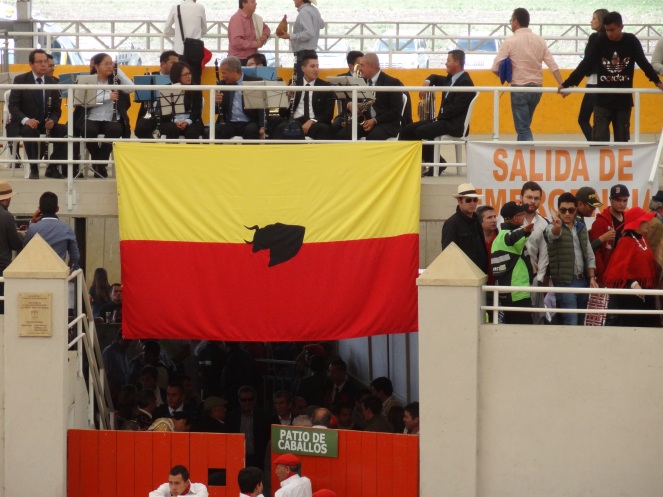 As we snaked our way through the bleachers, I couldn’t help but feel like I had taken a step back in time. I felt like I had hopped in a time machine back to ancient Rome, awaiting the dance of the matador and bull that was about to unfold before our eyes. As I listened to the music playing and felt my body become warm from all the wine, I started to think that maybe I was beginning to understand the magic of bullfighting. 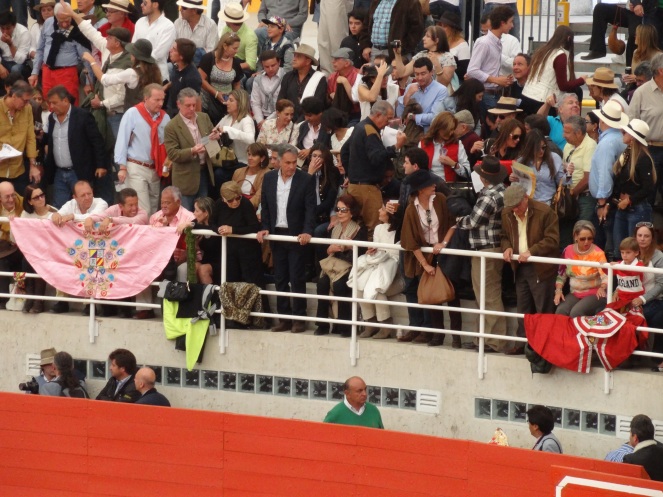 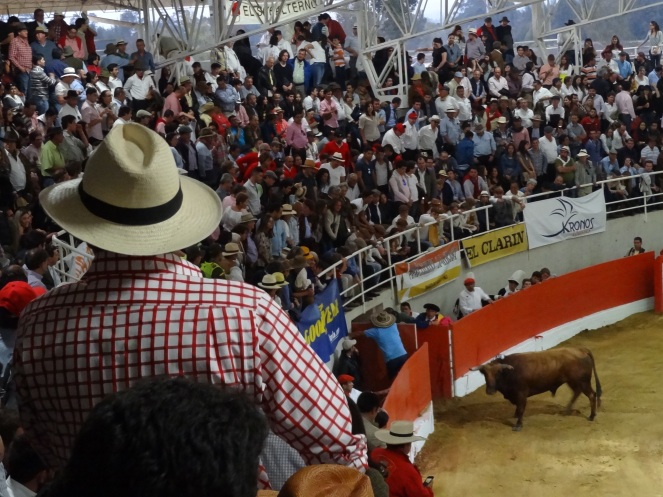 2 thoughts on “A Colombian Tailgate”