It began with some light, slow music. The doors of the arena were opened to welcome the matadors, the support crews of “banderilleros” and “picadores,” and horses onto the floor. Dressed in what translates to english as “suit of lights”, with gold tassels and minuscule detailing, the matadors came out shoulders back, chests out, and heads held high. Knowing that they held the power and ability to be able to take down a bull, or die in trying to do so. They walk towards the side of the ring to salute the “president” of the bullfighting, who will be judging the event.

The Aguacilillo (“sheriff” or “keeper of the rules”) arrives on a majestic horse with a braided mane. The horse, with a gallop and skip in his step, rides up to one of the members of the support team with a large key – the key to open the door to where the bulls are held. 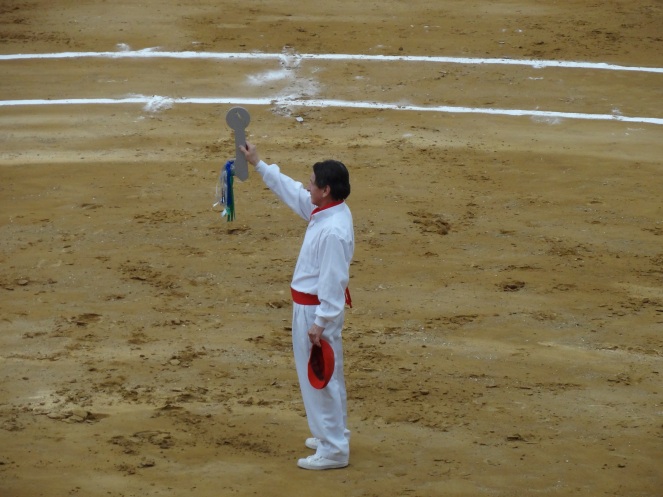 The music begins again, dark and deep, signaling that the first bull is about to be released. Two men come out into the center of the ring with a large sign overhead with the name of the bull, weight and the matador, who will soon bring it to its death…

In a traditional bullfight, there are 6 bulls and 3 matadors, with each matador having their own support crew. The matadors each go through the “dance”, as I will call it, ordered by experience, with the most experienced opening the arena.

The first bull enters the ring, large and angry. The crowd watches in awe, eyes glued to the ring down below. The bull circles the outside of the ring, looking for something to charge at. The muscles pulsing, moving as the bull strides swiftly and strongly. 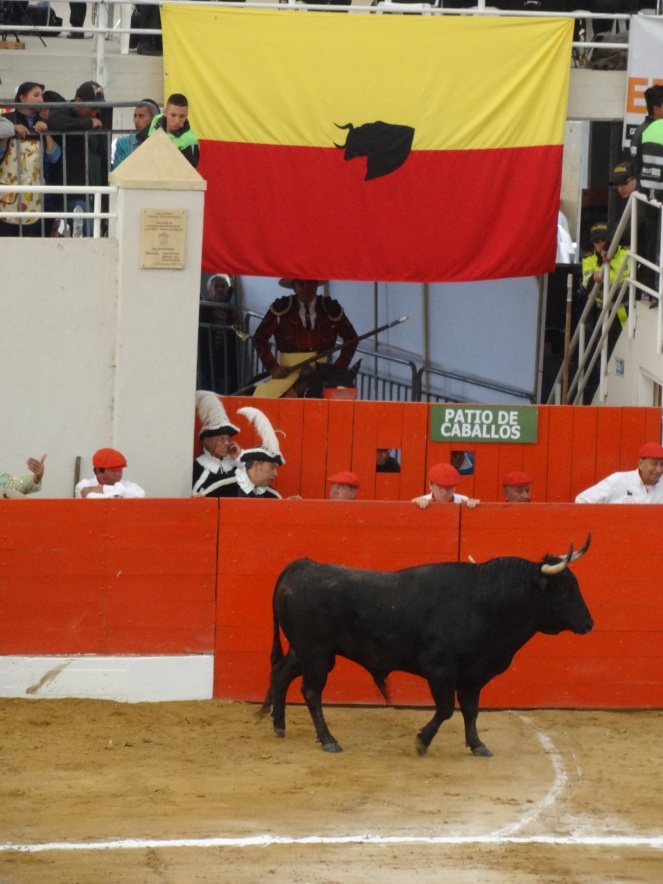 The support crew began to come out from the side “hiding spots,” with their pink and yellow capes, holding them with both hands as they are very heavy. They draw the bull to the far side of the ring to make space for the horse to enter. 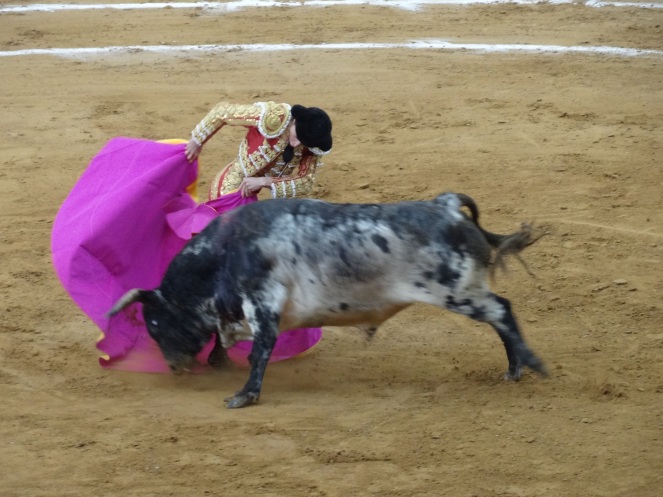 The horse comes out, completely covered in metal and with blinders, guided by the man siting upon its back holding a long spear, called the “picador”. The matador leads the bull to where the horse is, using his cape to guide him. The bull approaches the horse, as he sees it as a threat and begins to charge him. The man on the horse leans down and spears the bull in the upper back, holding the stick down as the bull leans himself into the side of the horse. The horse moves with the bull, but does not know what is going on, so remains calm, steady and unharmed.

A member of the support crew comes over to the bull, who is still set on trying to kill the horse, to distract and move him away from the horse. The bull notices the movement of the cape once again and begins its charge towards the man instead, while the horse in the meantime leaves the arena.

As the bull moves back towards the center of the ring, the “banderilleros” with two ornate sticks, one in each hand, emerge into the ring. They stand with their hearts lifted, ready to charge the bull, with the aim to place the sticks on top of the bull’s back. 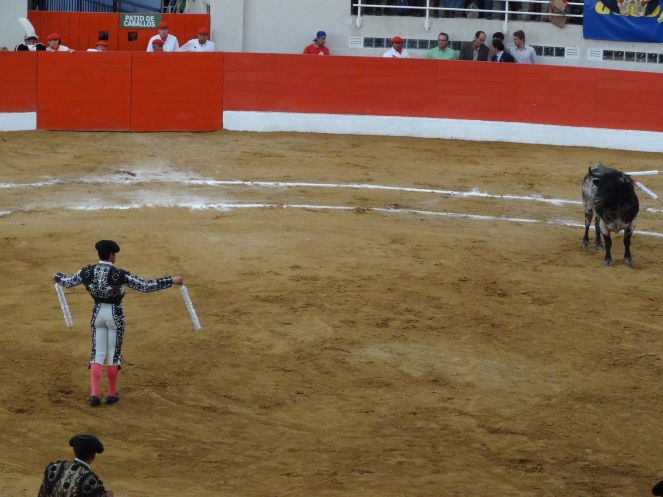 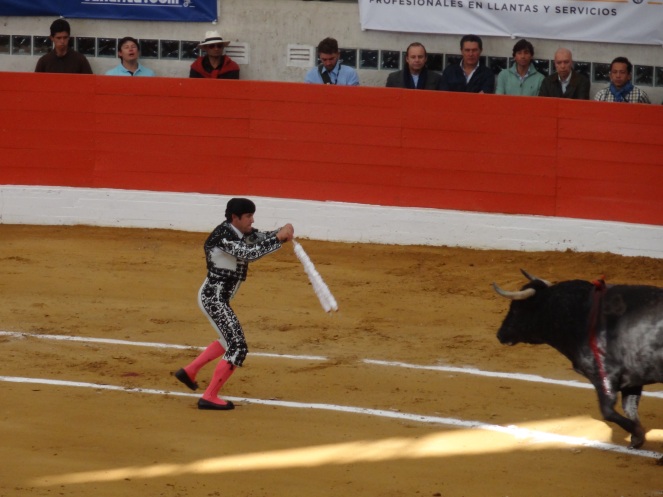 After the bull has been “sticked” 3 times and has 6 tassels hanging from its back, the music signals again for the matador to take his place in the ring, for the final act. The support crew takes there places behind the little hide-outs, ready to make a move in the case something goes wrong.

The matador enters from the side, making his way to the center of the ring. He takes of his hat and holds out his arms to receive the welcoming from the crowd. He holds his head up and walks to the center of the ring, slowly and with intention. He stops and throws his hat to the side, watching it roll over itself through the dirt, hoping that it will land facing down, which is seen as good luck.

The matador is ready, poised, and determined. He holds a red cape (called a “muleta”), which is lighter and smaller than the initial pink and yellow ones used. He cautiously  approaches the bull. The matador’s face says it all; he is ready to bring down this bull. Tranquil and fierce, the matador leans the flag towards the bull’s beady, black eyes to begin the dance. 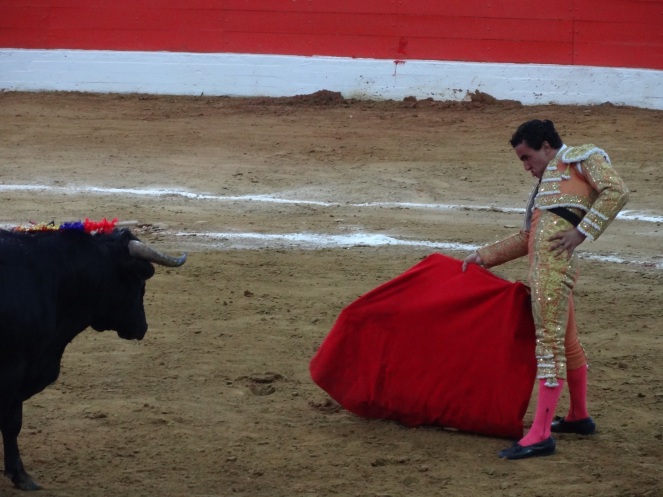 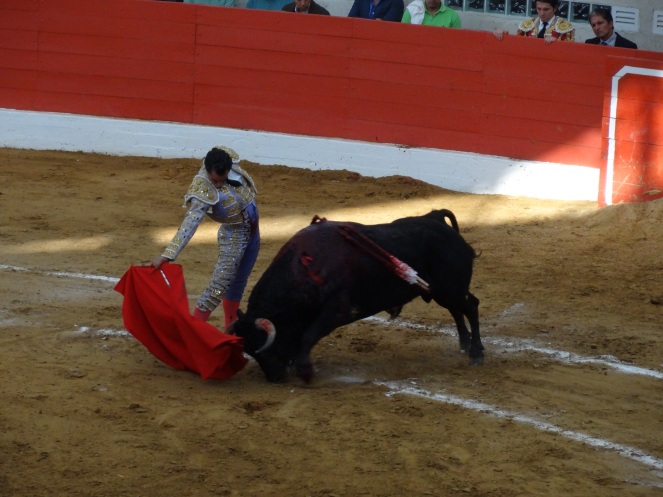 The crowd begins to cheer, “Ohhh-Leyyy!!!” As the matador successfully maneuvers the bull. The feeling of the crowd can be felt down below, from how people are sitting on the edge of their seats to the level of cheering in the arena. The band elevates the mood as well, plyaing upbeat and encouraging music, only when the matador and bull both are in sync to this complicated waltz.

There is a respect that the matador has for the bull, in that he gives the bull the opportunity to fight for its life. If a bull is brave enough, strong enough, then his life is spared, and the bull is returned to the grasslands where it grew up, free to only procreate for the rest of its life, as to maintain the strongest genes that have been perfected over centuries. 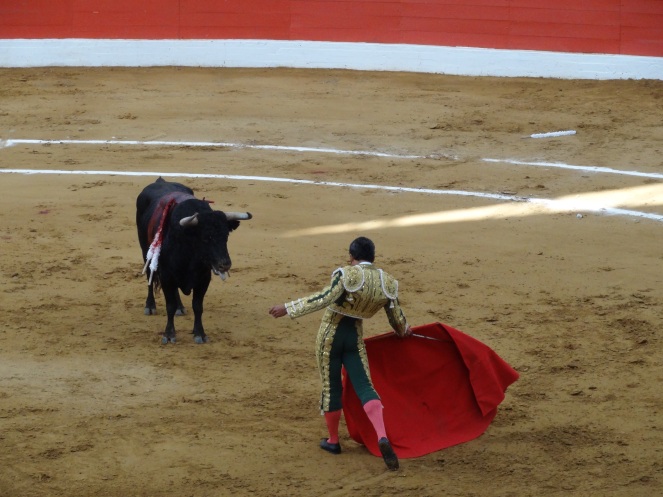 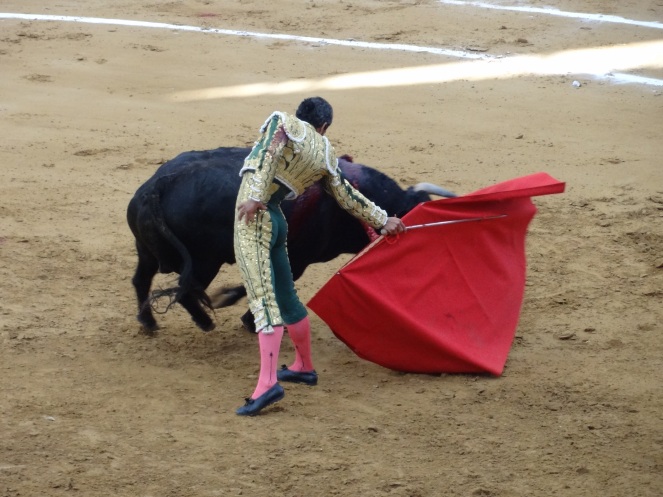 After a bit of dancing, the clock strikes midnight, and it’s time for the kill. The matador changes out his sword for one used to kill the bull. They continue with a short dance, with just a few spins. A hush falls over the crowd, as the matador brings the sword up to his face level, staring straight into the bull’s eyes, trying to read its potential last move.

The matador charges straight for the bull’s upper back, killing the bull almost instantly. The bull falls to the ground, and the crowd jumps to their feet in applause. The matador holds up his hat to the sky, with pride, honor and joy. 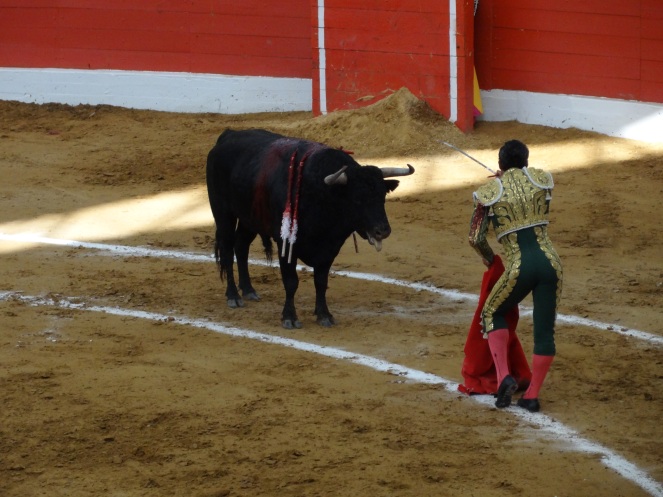 Then, the bull is there, dead. Two black and white majestic horses appear, with a metal carrier to pull the bull out of the ring. After the bull is tied up, the body is dragged around the ring, while the audience applauds and cheers as it finally exits.

The crowd is sometimes still standing at this point, waving white handkerchiefs over their heads, signaling to the president that the matador did an excellent job. As a trophy, the matador could receive the ear (or both ears when it was really spectacular) of the bull as a trophy. The president then decides whether the matador performed well enough to receive an ear. He presents the ear to the matador, who then holds up the ear to the crowd, and begins to circle the outskirts of ring to receive the applause.

Up on their feet, everyone starts whistling and cheering, throwing down their wine-drinking leather flasks called boots, red carnations, or their hats. Sometimes even, the matador gives away the ear, throwing it up for a fan in the crowd to take home. Parading around with his support crew, the matador is proud, happy and beaming. 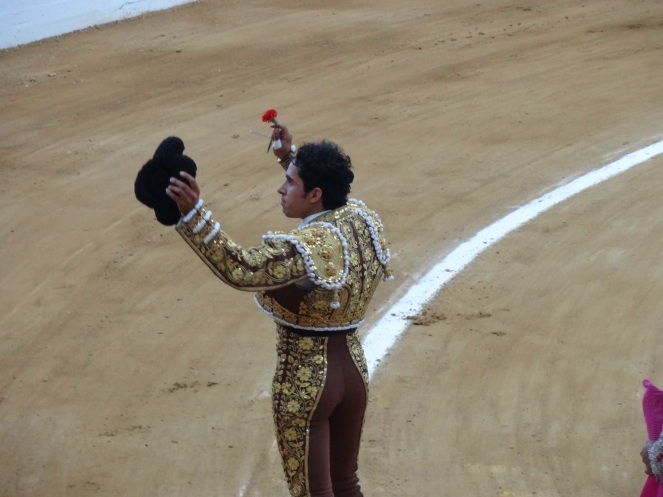