When I told my parents over skype that I had fallen in love and that I was moving to Colombia with this person who they had not heard even a word about, they took it surprisingly well. My father was beaming ear-to-ear and was excited about my new adventure. And my mother, as to be expected, didn´t have any words. She sat frozen staring into the computer, as I sat on the other side in Kenya.

The only thing she was able to mutter, softly and slowly, was “Well honey, do you have peace in your heart?” and to that I responded, “Yes, Mom, more peace in my heart than ever before.”

Upon moving to Colombia, my family immediately expanded to Santiago´s family. Like most families in the world, extended families can usually be found in the same city, unlike us Americans who seem to take off throughout the US the second we leave for college. Santiago´s family, for example, all live in Bogota, all his aunts, uncles, cousins, ect. Not knowing a word of spanish my first weekend in Bogota, we went to his aunt´s apartment for, what I was told was, a “lunch”.

“Lunch” in Colombia is a loose term, as I have come to learn it. Lunch in the US, as I comprehended it, didn´t exist. My memories of lunch consisted of shoveling in a PB&J and an apple in my desk. Because I didn´t possibly have enough time to go somewhere for food, and I thought it was a waste of money to go pick something up, just to eat it in my desk. Even on weekends, I stuck to the routine of PB&Js because, deep down, I really liked it, and I never really stopped to think about eating something else.

“Lunch” in Colombia can range anywhere from 1 hour, which is on the quick end, to an all day event. During lunch hour, restaurants are full with professionals taking there time eating, meeting a spouse, eating with the family, ect. It´s the main meal, and they take their time with the ones they love to enjoy it. The city is filled with places to eat a home cooked lunch, traditionally a soup, some meat, rice, and a little salad or vegetables. And the cost, just about $3 USD.

At Santiago´s aunt´s house, lunch is a full day event. I have described it to my family before, as similar to a thanksgiving dinner, but for an occasion, such as someone in the family´s birthday (which happens often when there are 7 siblings on Santiago’s father’s side). But calling it thanksgiving doesn´t even do it justice, since it´s at a minimum an 8 hour stretch of being with family and eating.

Lunch usually begins at 2pm, and upon arrival, we are typically served a homemade soup. These soups are the kinds of soups your grandmother has a recipe for and your mom maybe makes on occasion, with vegetables, some meat, and maybe you put some avocado on the top. The kind of soup you can feel the warmth of the soup fill your soul with love and gratitude.

Then comes some sort of meat usually with potatoes, maybe rice, sometimes some salad. In the US, this would be it for the meal. Well, we probably wouldn´t have had even the soup. We may have only gotten the main course.

By this point, it is midafternoon and usually I am at the point where I´m full as a tick. Right about when I think that I couldn´t possibly have another bite, we have some coffee or some aromatica (delicious fruit tea that they drink in Colombia), which typically comes with more food. Usually, we have some arepas, little cookies, or cake (note, that this cake or desert would be different than a cake which would be used later to sing happy birthday).

We sit around, we read magazines, we talk with each other, we watch part of a soccer game. But my favorite part is talking with the aunts in the kitchen. There are 3 aunts, who begin the cooking around 8am in the morning. One time I came at 11am to learn how to make some of the things, and I realized that coming that late didn´t do me much good, since they had been hard at work for hours by that point. And they don´t leave the kitchen. They continue to cook the whole day. Everything wholemade and enough food to feed a village.

By early evening, around 8pm, is usually when we begin with the presents and cake. There was one time when two brothers bought cakes and we ended up with 4 cakes (for 18 people) and we ate most of them…

Then, if you have not had enough food by that point, more arepas start coming out, hot off the stove around 9pm. It’s hard to say no to the warm gooey cheese dripping out of them, feeling the butter through the pancake-like mix, it’s difficult to say no. But more often than not, we end up taking most of the arepas home for later.

Upon leaving around 10pm, the aunts always try and send us home with all of the leftovers, thinking that we need more meat, soup, ect for the rest of the week.

After just a few of these meals, I would come home and take a hot shower to think about the day. Many a times, I would find myself wiping away tears, thinking about how lucky I was to have found a family that was so loving and welcoming. They never asked what I did for a job, they never asked what my parents did, they never questioned me being there. They have loved me for me, for laughing, for smiling, for being.

I hope that, as Americans, we can cheerish meals and time together, apart from our one day of thanks per year, and that we can learn to love and be in this life, more unconditionally, more genuinely, knowing that our job title and work aren´t important, and what is important is deeper than that. 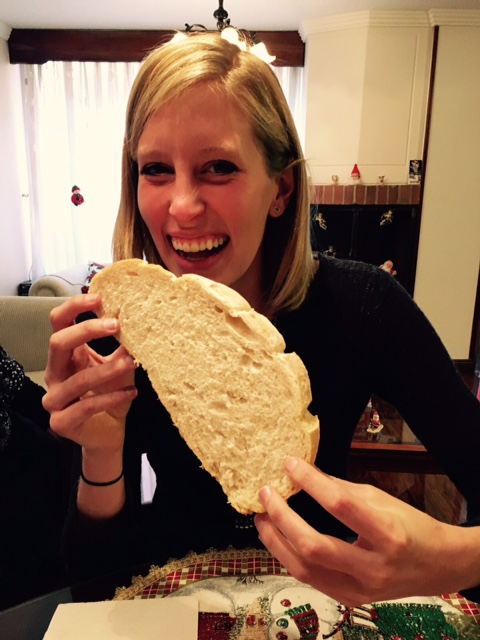 Unfortunately, I don’t have many pictures of our family lunches, because it’s just something I carry with me in my heart. Here’s just a few above, from the time aunt Margarita tried to feed me the whole loaf of bread, before the meal even began.

Laugh, love, enjoy each others company, and most importantly, never say no to food made with love 🙂